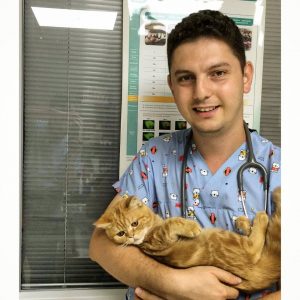 He was born in 1987 in Rize. He completed his primary and secondary education in Rize. In 2005, he was admitted to Istanbul University Faculty of Veterinary Medicine. He worked as an assistant student in Department of Obstetrics and Gynecology by following the professional developments closely since the first years of his education. He graduated in February 2013. He participated in many vocational training, congresses, seminars and courses in Turkey and abroad. He worked in VetPlus Veterinary Polyclinic in Besiktas and in Beykoz Municipality as a veterinary surgeon. In October 2015, he has opened Rizem Veterinary Clinic in Rize Center. He is married to Pınar KEFELİ and he is the father of a cat named Lokum and a dog named Piços. He is still working as a veterinarian in his clinic.